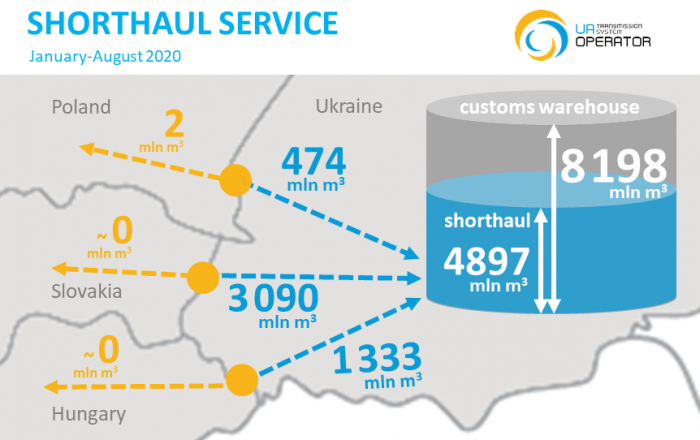 “In August, customers significantly increased the volume of gas transportation to the “customs warehouse” in their nominations, including using the shorthaul service. I would like to note that for several months in a row, the demand for “customs warehouse” and shorthaul services across the Ukrainian-Slovak border has been growing. In particular, it is due to the fact that since July at the “Uzhgorod – Velke Kapushany” interconnection point the virtual reverse became available temporarily for the period of repair works on the “import” gas pipeline from the GMS Budince. We hope that colleagues from the Slovak Gas TSO Eustream will support our idea of ​​implementing a single virtual interconnection point (VIP), and additional conveniences and opportunities for traders will be available on a regular basis. The similar virtual points  operate between Ukraine and Hungary and Poland.” said Sergiy Makogon, General Director of GTSOU.

Amount the 8 months of the year 2020, Gas TSO of Ukraine has transported 4.9 bln cub m in the shorthaul mode: from Slovakia – 3.1 bln cub m. from Hungary – 1.3 bln cub m, from Poland – 0.5 bln cub m. During January-August, a dynamic monthly growth in demand for the shorthaul service was recorded, during this time 22 non-resident customers and 4 Ukrainian companies have been using it.

Also, during 8 months of the year 2020, test transit operations were carried out in the shorthaul mode on the routes Slovakia-Hungary, Slovakia-Poland and Hungary-Slovakia, as well as, from the customs warehouse to Slovakia, Poland and Hungary.

For a note, the shorthaul service, introduced by the LLC Gas TSO of Ukraine on January 1, 2020, allows the company’s customers to book gas transmission between Eastern European countries through Ukraine at a favorable tariff rate. Additionally, together with service “customs warehouse” offered by the UGS Operator (JSC “Ukrtransgaz”), foreign and domestic clients receive convenient and attractive conditions for the gas storage in Ukrainian underground storage facilities.