March 23, 2021 – During February 2021, market participants extracted 436 mln cubic meters of gas from the gas transmission system for UAH 4.04 billion. Some 87% of the withdrawals, or UAH 3.5 billion, fall to the oblgazes (regional gas companies). Compared with January, gas withdrawals in February 2021 increased fourfold. 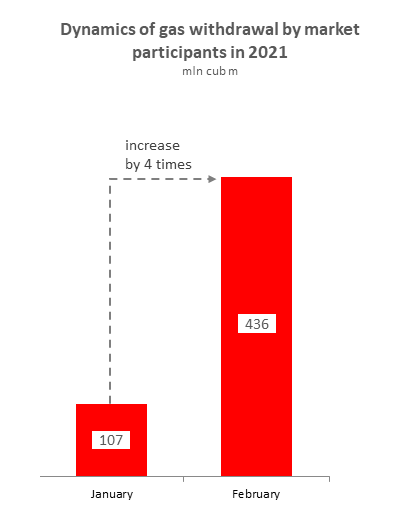 Inefficiency of the management of some gas distribution system operators (regional and local gas companies) and non-transparent policy of purchasing gas for own needs led to a crisis situation on the gas market in early February 2021. The Government and the NKREKP (National Energy and Utilities Regulatory Commission) were forced to take emergency measures to prevent outages of gas supplies to Ukrainian consumers. According to Resolution No. 235 dated February 17, 2021, which the NKREKP adopted at the instruction of the Government, natural gas market participants obtained a deferral of payments for formed negative imbalances for the period of February-March 2021 up to 90 days (previously this period was up to 20 days).

Taking into account the debts for previous periods and fresh accruals to be paid, Gas DSOs shall settle up with GTSOU in the amount of UAH 5.11 billion. Of these, UAH 3.56 billion (70%) are debts incurred from January 1, 2020 to February 17, 2021 (before the adoption of the Resolution), and UAH 1.55 billion – accruals for payments with deferral of 90 days. 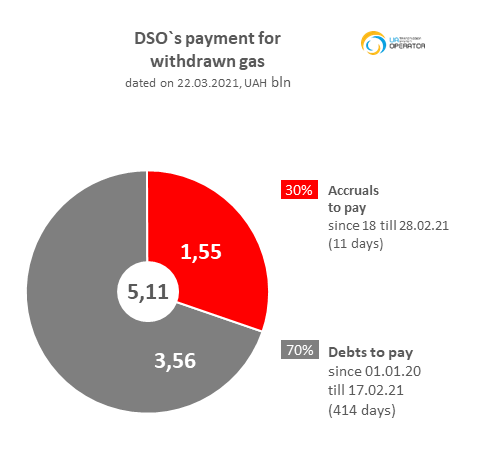 Donetskoblgaz (+UAH 175mn) and Ternopilmiskgaz (+70mn UAH) remain the leaders among the debtors, which show the largest increase in accruals for the extracted gas. Their total amount of arrears and accruals due reaches UAH 1,248 million (UAH 803 million for Donetskoblgaz and UAH 445 million for Ternopilmiskgaz). This is the evidence of the problem in the gas market, which must be solved at the legislative level. An effective measure, which will have a systemic impact to prevent the problem of debts for unauthorized gas offtakes, will be the introduction of special accounts.

Such an instrument is provided for in Bill No. 3800, but since June 2020, it has not yet been considered by parliamentarians.

“The level of indebtedness of regional gas companies to GTSOU is critical. The problem requires an urgent solution, as it poses a threat to the uninterrupted supply of natural gas to Ukrainian consumers,” commented Sergiy Makogon, CEO of Gas TSO of Ukraine. “With such debts, Gas TSO will not be able to make capital investments and finance in full the necessary repairs.”

It should be recalled that the problem of non-payment for imbalances, generated due to the unauthorized gas offtakes by Gas DSOs, has remained unresolved since 2015. This led to the accumulation of the bad debts to the previous operator of the GTS (JSC Ukrtransgaz) in the amount of more than UAH 44 billion for the period from 2015 to 2019.

Yet again, GTSOU appeals to the Verkhovna Rada of Ukraine with a request to urgently consider Bill No. 3800 on the introduction of special accounts. This will guarantee the targeted use of tariff income of Gas DSOs, which receive payments for natural gas from the population.  During the 14 months of operation of the new independent Gas TSO, the overdue debt has reached UAH 1.98 billion. Without the introduction of special accounts, GTSOU can repeat the experience of Ukrtransgaz. The Company plans to appeal to the National Security and Defense Council of Ukraine regarding current situation with the level of payments, which had now reached a critical stage.