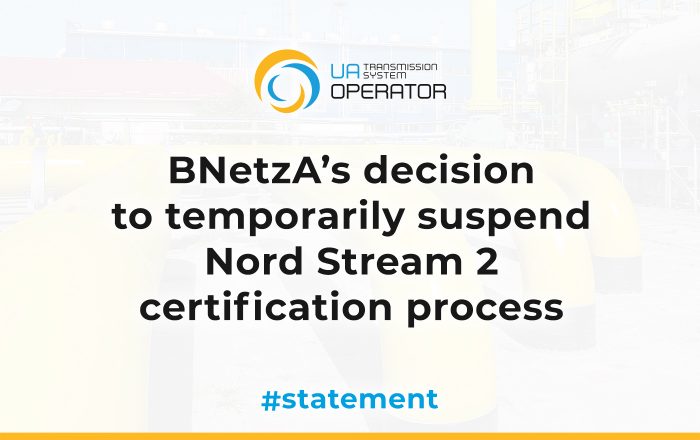 In a span of 24 hours, the German regulator, BNetzA, has made two momentous decisions. Granting GTSOU’s request to intervene in the process of Nord Stream 2 AG certification on November 15th, and suspending the said process on November 16th. It is important to note that the decision to suspend the certification procedure does not end the controversy related to Nord Stream 2; it is a temporary adjournment. Nord Stream 2 AG has decided to establish a subsidiary under German law, which will become the owner and operator of the German part of the pipeline. When the certification procedure is resumed, BNetzA will have to determine whether the subsidiary is in full compliance with German and European law. However, GTSOU’s position remains unchanged: neither Nord Stream 2 AG nor a German subsidiary can or should be certified as an independent gas transmission operator.

Nord Stream 2 is one continuous pipeline that Gazprom has championed and funded with an explicit purpose to bring Russian gas directly to the EU, bypassing Ukraine. When it comes to the applicable European laws and regulations, such as unbundling requirements, third party access and transparent tariffs, they must apply to the full distance of the pipeline. The superficial differentiation between the sections of the pipeline inside and outside of German territorial waters is meritless.

Gazprom has demonstrated time and again its willingness to leverage the dominant position it enjoys in the EU markets. It has chosen to restrict gas exports to Europe this year driving the prices up and fostering market fear despite the fact that abundant transit capacities were made available by GTSOU. At the same time, Gazprom is brazenly asking for exemptions from EU legislation with the broad aim to consolidate control over all gas transit routes. If those efforts are not thwarted and transit through Ukraine is not preserved, Germany and the EU will become even more vulnerable to energy blackmail.

To defend its interests, Germany and Europe have every right to demand that unbundling, third party access and transparent tariff requirements apply to the entire length of Nord Stream 2, starting from Ust-Luga in the Russian Federation. Implementing this requirement will allow Russian gas producers, other than Gazprom, to access Nord Stream 2 on transparent and non-discriminatory terms and ensure stronger market competition. To treat the parts of Nord Stream 2 in and outside German territorial waters differently would be an exercise in artificial legal formalism inconsistent with the letter and the spirit of European law.

Gazprom and its wholly-owned subsidiary – Nord Stream 2 AG – have chosen to build a pipeline that passes through the territory and/or territorial waters of a European Member State. The EU is thus free to permit the operation of that pipeline only on the condition that the operator complies with criteria that have been established by the EU. This will be a way to fulfil the fundamental objectives of gas supply security and fair market competition.

No predetermined allocation of Nord Stream 2 capacity by the Russian Federation to Rosneft or any other designated market participant will constitute real third-party access. Fully compliant with European energy regulations, the Ukrainian transit system is open to any trader that wishes to bring gas from point A to point B. There can be no special treatment for any other pipelines bringing gas to Europe.

The certification process is rigorous by design. And it is an opportunity for Germany and the EU to demand that all parties seeking access to the European energy market demonstrate genuine respect of its laws as opposed to feign compliance.

The latest decisions by Germany’s Federal Network Agency have every potential to uphold the rule of law. A fair process is the first precondition for a just outcome. Nord Stream 2 is one continuous pipeline, and for unbundling, third party access and transparent tariffs to be effective, they have to apply to the full distance of the pipeline. It would be impractical and pointless to certify one operator to operate the pipeline in Germany’s territorial waters under European law, if the same rules do not apply to the rest of the Nord Stream 2 pipeline. GTSOU will continue to defend Ukraine’s interests and challenge the certification of Nord Stream 2 AG or a German subsidiary until a final decision is reached.