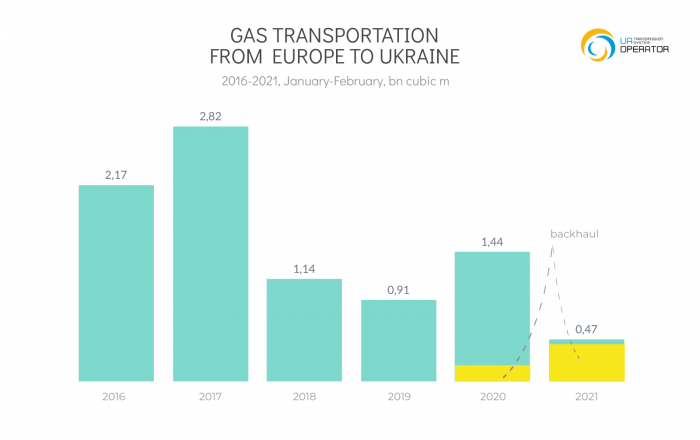 GTSOU: the volume of gas re-export increased 6 times in February – up to 199 million cubic meters

March 5, 2021 – In February 2021, at the request of traders, GTSOU re-exported 199 million cubic meters of gas to the EU from Ukrainian underground storage facilities. This is 15% less than in January. Gas transportation from the EU to Ukraine during this period decreased 15 times – up  to 29 million cubic meters. The dynamics of re-export and transportation of gas to Ukraine is associated with the high load of underground gas storage facilities both in the EU and in Ukraine. Furthermore, the statistics are influenced by the fact that February is a short calendar month.

“Suppliers and traders who injected gas into Ukrainian underground storage facilities in the “customs warehouse” mode and using the short-haul service during the summer use their own reserves. This is a favorable time for this, as prices on energy exchanges are much higher than in summer. Moreover, customers continue to store gas in Ukraine. This indicates that the Ukrainian gas infrastructure is already part of the EU energy system, and we are deepening further integration with Western markets”, – commented Ievgen Todorov, Commercial Director of GTSOU.