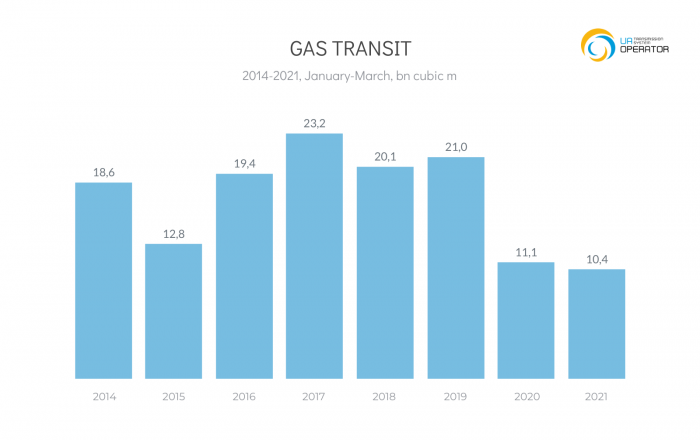 In the first quarter of 2021, the transit of natural gas amounted to 10.4 billion cubic meters

April 6, 2021 – In the first quarter of 2021, the transit of natural gas from Russia to European countries amounted to 10 441 million cubic meters. This is 5% more than provided for in the current Transit agreement*. The average daily transit volume was 116 million cubic meters.

In particular, in March, the transit of Russian gas via the GTS of Ukraine increased by 27%, compared to February and reached 3 691 million cubic meters. The dynamics was caused by decreased volumes of natural gas in European underground storage facilities and, accordingly, an increased demand for the blue fuel in the EU countries.

“Countries of the EU had used the stocks of natural gas in their own underground storage facilities during the winter period, so the flows of blue fuel to these countries increased.  Such dynamics was also influenced by the high price environment on European markets,” said Ievgen Todorov, Commercial Director of GTSOU, commenting on the results. – The Ukrainian GTS is one of the most extensive in Europe in terms of capacity, has a ramified infrastructure and is highly flexible, so it can promptly respond to demand fluctuations and ensure reliable natural gas supply to the EU, which is exactly what happened at the end of the first quarter. Nevertheless, the decrease of transit volumes in the 1st quarter of 2021 against the same period of 2020 was 6%. This is partly attributable to the conditions of the Transit agreement*, as well as due to re-routing the gas flows via Gazprom’s bypassing pipelines.”