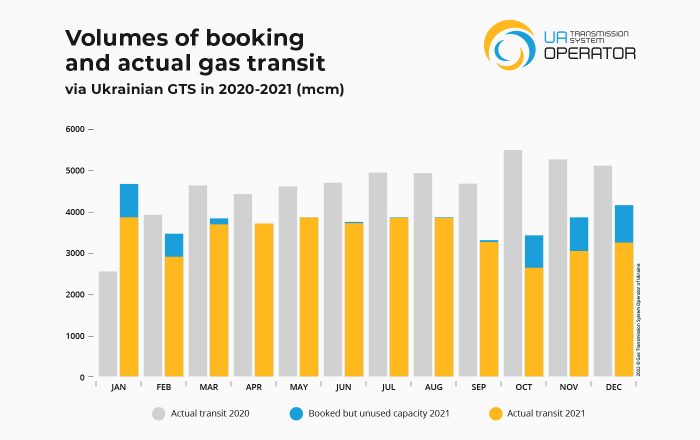 In total, 44.4 billion cubic meters of transit capacities at the exit points from Russia were booked in 2021 (40 billion cubic meters, according to the terms of the current transit contract*, 4.4 billion cubic meters were booked at monthly and daily auctions), and only 41.6 billion cubic meters of which were used. Despite a significant increase in prices in European gas markets due to a shortage of natural gas and a reduction in reserves in European UGS facilities, the possibilities of the Ukrainian transit route, that are more than sufficient to overcome the gas crisis in the EU, were not used. On the contrary, during the period of the greatest increase in gas prices in October-December on the European gas markets and the beginning of the autumn-winter period, the average monthly transit of gas from Russia to the EU countries was 17% lower than in January-August.

“In 2021, the capacity of the Ukrainian GTS was used by less than 30%. This proves once again that the existing transit capacities are sufficient to supply the EU with natural gas in the required volume, and there is no physical or economic need for the construction of new gas pipelines. The reliable and ramified GTS of Ukraine is capable of providing transit of at least another 100 billion cubic meters of gas in the European direction”, – commented Sergiy Makogon, CEO of Gas TSO of Ukraine.

Natural gas transportation from the EU to Ukraine

Natural gas import to Ukraine amounted to 2.6 billion cubic meters, which is six times less than in 2020. The import was carried out mainly by virtual reverse (backhaul), which GTSOU introduced at the beginning of 2020. 89% of gas was imported by virtual reverse.

In total, in January-December, the transportation of gas from the EU to Ukraine was ordered by 50 traders, including 25 Ukrainian companies and 25 foreign ones. And 29 companies used the services of short-haul and “customs warehouse”.

Hungary became the main gas exporter, from which more than 2,2 billion cubic meters of gas was delivered (-47% compared to last year). Despite the stop of physical transit to Hungary from October 1, 2021, the virtual imports remained at the Bereg point: in October-December 2021, Ukraine imported 55.6 million cubic meters from Hungary, and exported – 792 million cubic meters.

Last year, GTSOU successfully worked on expanding guaranteed capacities for gas imports to Ukraine. In particular, in order to reliably supply natural gas to border consumers in the Odessa region, a guaranteed capacity at the Isakcea/Orlovka point on daily basis, which depends on the volume of natural gas consumption by Ukrainian consumers, has been agreed with the Romanian operator. And from January 1, 2022, the guaranteed capacity in the Hungarian direction became available – 8 million cubic meters per day, which made it possible to increase the import capabilities of Ukraine by a third and diversify the sources of imports.

The supplies to Moldova took place against the backdrop of difficult negotiations between the government of this country and Gazprom. As a result, in October 2021, GTSOU increased the balancing account limit of the Moldovan operator under interconnection agreement. For the first time, Ukrainian companies exported gas to Moldova through the Oleksiivka GDS.

“The GTS operator finished year of 2021 with good news for Ukraine – an increase in guaranteed capacities for gas imports by one third. We perceive serious risks due to reduction in the transit of Russian gas through Ukraine and consider it necessary to strengthen the reliability and flexibility of the gas transmission system in Ukraine in any conditions. For this reason, we have focused on diversifying sources of gas supplies to Ukraine and modernization, significantly increasing investments in the Ukrainian GTS”, – said Sergiy Makogon, CEO of Gas TSO of Ukraine.

For the first time, Ukraine and Hungary offer firm capacity for gas imports on the quarterly basis

Ukraine increases its import firm capacities by one third