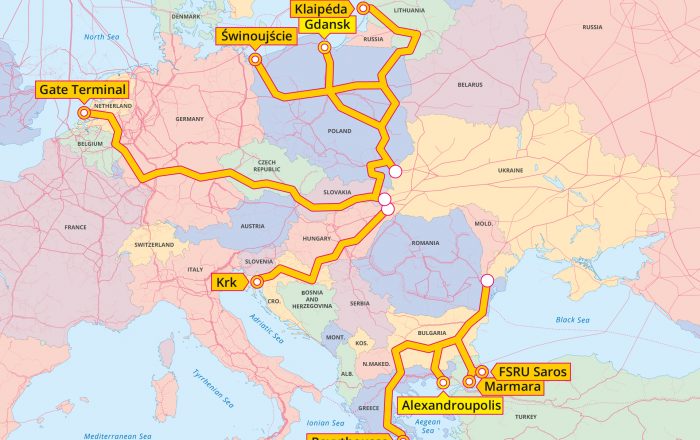 LNG opens up new opportunities for Ukraine and the countries of Eastern Europe. Diversification of gas sources and the ability to obtain resources from Norway, the United States, Qatar, and other countries will help strengthen the energy security of the entire region, destroy the monopoly of russian gas and restore a competitive market. This was stated by Olga Bielkova, Director of Corporate Affairs of Gas TSO of Ukraine, during her speech at the Baltic LNG&Gas Forum. According to the Olga Bielkova, today, there are several potential directions for LNG imports to Ukraine:

“Today, due to the war, gas consumption in Ukraine has significantly decreased, and after the victory, we will all have to rebuild not only cities but also the Ukrainian economy. In the long term, Ukrainian suppliers are interested in the LNG market, as opposed to the spot market, to diversify gas sources. Ukraine also has something to offer our partners: access to UGS facilities, gas transit over short distances between the countries of Central and Eastern Europe, and integration of decarbonized gases for industrial needs. In the short term, we have to beat russia on the energy front – stop Nord Stream 1 to save Ukraine’s gas infrastructure.” – believes Ms. Bielkova.

Thanks to the strategic investments of Poland, Lithuania, and Slovakia in gas infrastructure – GIPL interconnector, Baltic Pipe, Poland-Slovakia interconnector, and LNG terminals – Ukraine has gained increased access to the LNG market. The Gas TSO of Ukraine is constantly expanding cooperation with strategic partners to diversify sources and natural gas supply routes to Ukraine.