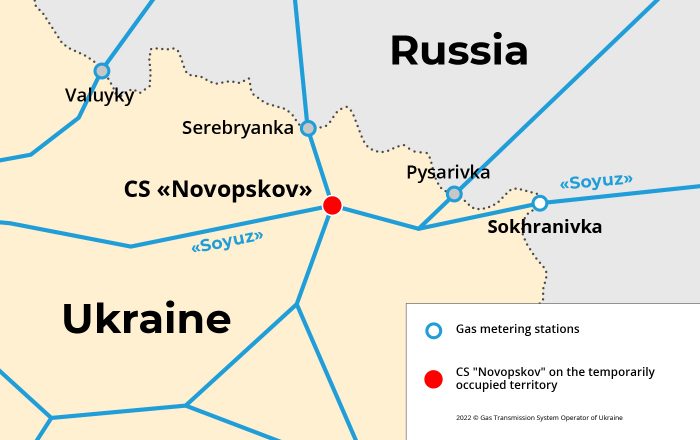 Gas TSO of Ukraine (GTSOU) reports on gross interference by representatives of the Russian Federation and illegal armed groups under their control, the so-called LNR, in operational work and technological processes of gas transportation through compressor station (CS) “Novopskov” in the Luhansk region.

CS “Novopskov” is an important object for the organization of gas transportation to consumers of the Donetsk and Luhansk regions. Also, almost 1/3 of gas transit to Europe via Ukraine is transported through this compressor station.

GTSOU recorded several actions by the occupiers, including changes in the operation of communication equipment and technological modes, which may result in the loss of operational control over the CS equipment. It will lead to significant risks to the integrity of the Ukrainian gas transmission system, the stability of gas transportation modes, and the impossibility of gas transportation through the CS, including gas volumes under the transit contract.

We call on the aggressor’s representatives to refrain from further pressure on GTSOU employees and interference in the CS operations. Otherwise, in case of loss of operational control, GTSOU will be forced to stop the operation of this facility to keep the integrity and safe operation of the Ukrainian GTS. Disconnection of the CS Novopskov means no transit through the GMS Sokhranivka. Responsibility for the consequences falls on the Russian Federation.