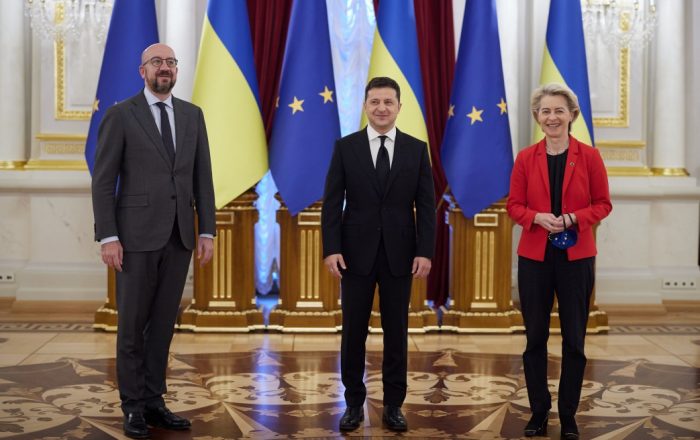 Ukraine is a strategic country for gas transit: the EU supports the continuation of gas transit through the Ukrainian GTS after 2024. As laid out in the joint statement issued following the Ukraine-EU summit, which was held in Kiev on October 12, 2021.

“We underlined the importance of pursuing the modernization of the Ukrainian national gas transmission system and further cooperation on strengthening European energy security. In the context of the existing and future gas transmission systems on the territory of Ukraine and the EU, we reiterated our mutual commitment to full implementation of the applicable EU legislation and the Association Agreement obligations. We also agreed to make best use of each other’s existing energy networks and capacities, and to consult and coordinate, as appropriate, on infrastructure developments, which may affect interests of both Parties. We underlined the need to fully apply the EU energy and competition legislation. Ukraine and the EU stressed the importance of working together against any potential efforts by third parties to use energy as a weapon in particular as regards the effects on the sustainability of gas transit through Ukraine,” the joint statement said.

Ursula von der Leyen, President of the European Commission, said at the joint press conference of the participants of the EU-Ukraine summit that the Commission’s task – together with Ukraine to work through all scenarios for gas supplies in the future. They include the possibility of larger volume of reverse gas supplies from Slovakia.

It should be noted that Slovakia is one of Ukraine’s key partners; the increase of capacities at the border with Slovakia will open opportunities for strengthening energy security of Ukraine through diversification of gas supply sources. Including from LNG terminals in Poland, Lithuania and Croatia, and for the European Union – by ensuring unhindered and sustainable access to the underground gas storages in Ukraine.

Please also be reminded that the representatives of LLC Gas TSO of Ukraine emphasized on the use of natural gas as an energy weapon at the meeting of the NATO Political Committee in Brussels on October 5th this year. In order to prevent that, Gas TSO consistently advocates the need for compulsory implementation of European network codes at the Ukraine-EU border and the earliest possible extension of the transit contract for the next 10-15 years, with the possible involvement of the European Union as a contract party.

Today, Ukraine can position itself as a reliable partner in solving the problem of gas shortages in the European market. The Ukrainian GTS is capable of shipping natural gas from the eastern to the western border in 36 hours: from the source of natural gas supply to the border with EU member states, with no additional investments or other gas pipelines.