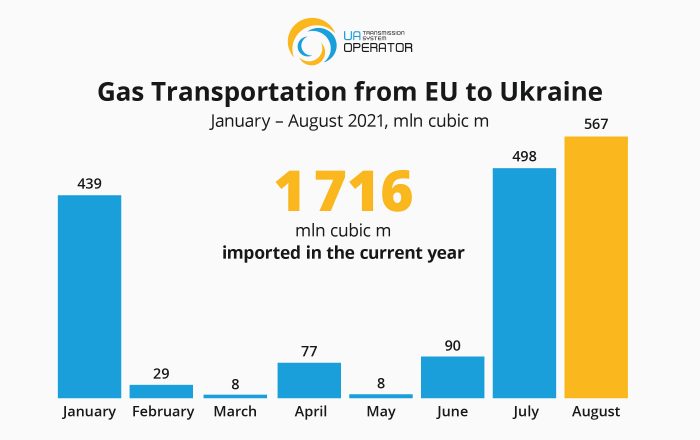 In addition, in August there was pilot gas supply via the Trans-Balkan gas corridor. Thus, a total of 2.272 thousand cubic meters of gas was imported from Romania in August. Now the testing of this direction is underway.

It should be reminded that in August 2020 Gas TSO of Ukraine for the first time carried out reverse transportation of gas via trans-Balkan gas corridor – from Greece through GTS of Bulgaria and Romania to Ukraine, which demonstrated the technical capacity of this route and subsequently its perspectives.

“We continue to work on the development of natural gas transportation routes within the Trans-Balkan route to increase the import capacity. This will contribute to better cooperation with our international partners and to diversification of gas supply sources,” said Sergiy Makogon, General Director of GTSOU.  “Under such conditions, Gas TSO of Ukraine, as an efficient company, which has never breached the terms and conditions of gas supply and has established itself as a reliable partner, can become a guarantor of energy security in the entire Eastern European region.”

Ukrainian GTS is fully ready for the heating season

The role of natural gas in the energy transition is decisive, – Olga Bielkova
more news