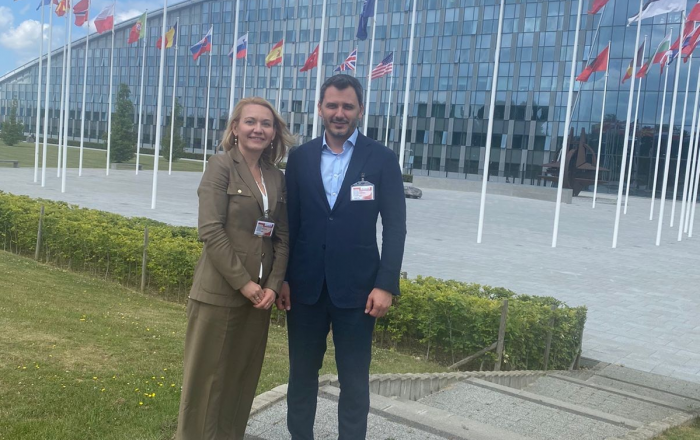 Delegation of Ukraine to NATO: EU countries can get rid of dependence on russian gas pipelines

Taking into consideration russia’s full-scale invasion of Ukraine and the threats to Europe’s energy security caused by the “non-partner” behavior of the russian company “Gazprom,” Olga Bielkova, Director of Government and International Affairs of GTSOU, as part of the delegation together with Yegor Chernev, Chairman of the Permanent Delegation of Ukraine to the NATO Parliamentary Assembly took part in the meeting of the Political Committee of the Alliance on Energy Security.

The members of the Delegation of Ukraine warned against further growth of European countries’ dependence on russian energy resources and gas transportation routes.

Olga Bielkova stated that she agrees with the Ministry of Energy of Ukraine and the Ministry of Foreign Affairs concerning the fallacy of the decision of the Government of Canada to issue a permit to return the Nord Stream 1 turbine repaired by Siemens Canada to Germany.

“Energy and geopolitical security of the region are inseparable. russia has already demonstrated that its most powerful weapon is energy resources, particularly natural gas. A number of the most dependent on russian gas countries need time to replace this resource. But already, it is possible to get rid of dependence on russian gas pipelines and make russia dependent on Ukrainian gas transport infrastructure. It will allow Ukraine to preserve its integrity for Ukrainian and European consumers. Besides, GTS is an important component of the energy security of CEE countries,” says Olga Bielkova.

Members of the delegation reported on the capacity of the Ukrainian gas transport infrastructure. They emphasized that Ukraine can improve European energy security despite the war, but for now, it is necessary to work on preserving the GTS.

“Ukrainian GTS provides a vitally important resource for twelve million Ukrainian consumers. Protecting the system from shelling is our priority task because it provides heating and gas to millions of Ukrainians’ homes. Besides, Ukraine, despite the war, as a reliable partner of the EU, still transports more than a quarter of all russian gas imported to the EU. But Ukraine needs additional measures to support its gas sector, which can bring mutual benefits to Ukraine and Europe,” said Yegor Chernev.