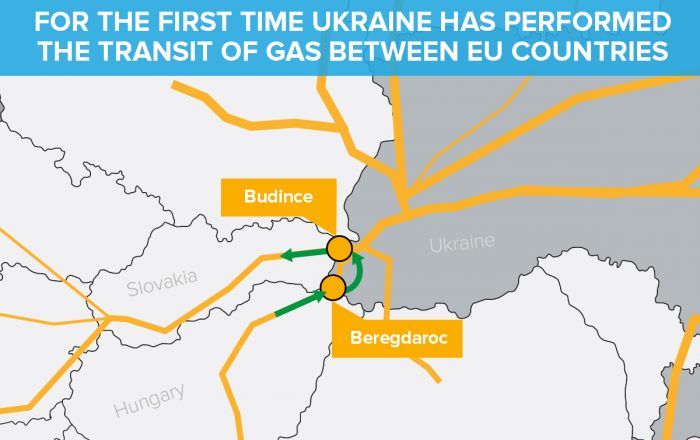 16th of March 2020, Kyiv – TSO of Ukraine has transported first volumes of gas in a transit mode between two European countries. A well-known German energy trader ordered the transportation of natural gas through Ukraine using the route Hungary – Slovakia.

In addition, we should note that gas is measured in energy units, same as according to the transit agreement with PJSC Gazprom.

After signing of a new transit agreement with PJSC Gazprom and new dispatching agreements with adjacent European TSOs, the TSO of Ukraine is actively introducing new transportation services for Ukrainian and foreign customers.

The new transit service “short-haul” enables Network Users to transport gas between European countries (Poland, Slovakia, Hungary and, in future, Romania) through the territory of Ukraine. The launch of this service will activate gas trade between countries of Eastern Europe and will allow additional utilization of capacities of the Ukrainian Gas Transmission System, which after the construction of Nord Stream-1 is no longer used at the fullest extent.

LLC Gas TSO of Ukraine is also working on creation of virtual points that will make an operation at interconnection points easier for adjacent TSOs as well as gas traders. Currently, the negotiations are being held regarding creation of a single VIP at the Ukrainian-Polish border.

LLC Gas TSO of Ukraine invites all traders to actively use short-haul service that can be combined with the UGS Operator’s service such as customs warehouse.

The new short-haul service is available from January 1, 2020, and its public presentation to a wide range of potential customers was held at the Ukrainian Energy Forum 2020.

For details, please see the Introducing SHORT-HAUL brochure and section “Business and Services” at our website.