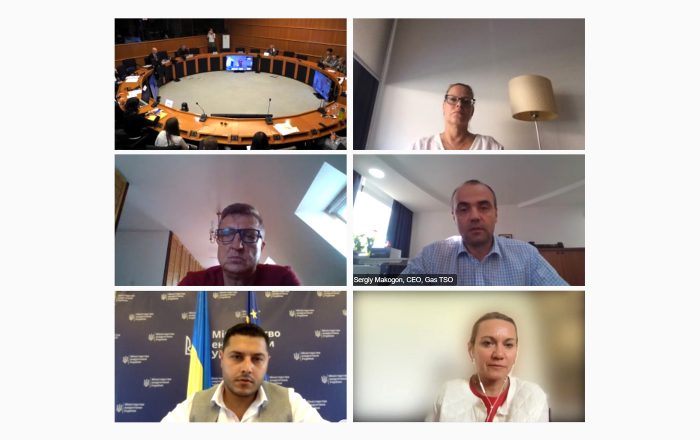 During the round table, Deputy Minister of Energy Farid Safarov and Sergiy Makogon, CEO of GTSOU, addressed the MEPs with a proposal to support the suspension of gas transit through Nord Stream-1. It could help protect the Ukrainian gas transport infrastructure from large-scale destruction by the Russian occupiers and meet the Ukrainian people’s humanitarian needs.

In turn, MEP Jerzy Buzek reaffirmed the intentions of European countries to reduce dependence on Russian fossil fuels by increasing the resilience of the EU energy system, including the European Commission’s REPowerEU initiative.

“The EU’s position on Russian energy imports to the EU, which covers oil and gas, is apparent – an immediate and full ban. Back in April, during the negotiations in the European Parliament on the Resolution on this topic, my political group supported the full Russian energy embargo. On the 7th of April, we saved the overwhelming support of this Resolution. It was later confirmed for both Nord Streams – first and second – to be completely abandoned. Of course, it is not easy to implement such a full ban. And we are working on it”, said Jerzy Buzek.

Volodymyr Bilchyk, MEP,  agreed with his colleague on the need to strengthen energy security. In his opinion, Ukraine’s gas transit and storage infrastructure are the core pillars that could further enhance European and regional energy security ahead of the winter.

“Ukraine needs greater access to the EU gas market; and, conversely, Europe can benefit from access to Ukrainian storage facilities (30 bcm/a) – the largest in the region and located near the EU-UA border. The Ukrainian gas transmission system is already governed by European gas market rules and has developed a competitive, transparent, and non-discriminatory domestic gas market. In light of the impact of energy shortages on the EU Member States, particularly from the Central and Eastern Europe region, it is imperative to safeguard the transit and gas storage role of Ukraine”, said Volodymyr Bilchyk.

In their address to the MEPs, Sergiy Makogon and Farid Safarov reiterated the importance of the Ukrainian GTS, which has dual use: gas transit to the EU and gas supply to domestic consumers for humanitarian use – heating and cooking. Preservation of transit via the territory of Ukraine until the introduction of a total embargo on Russian gas protects the Ukrainian gas transportation infrastructure from deliberate destruction by the Russian occupiers. And the continuation of transit via the Ukrainian route is possible in case of blocking alternative gas supply routes to Europe and limiting the use of Nord Stream-1.

Mr. Safarov noted that such a decision would not impose an additional economic burden on European consumers, as they would receive the same amount of gas through the Ukrainian route.

“Rerouting the flows from Nord Stream 1 will not threaten the security of the gas supply either. Before Nord Stream 1, the Ukrainian gas transit system, with more than 146 bcm of annual transit capacity, was the main route for delivering gas to Germany and Austria. The system was built with sufficient capacity to supply Europe”, said Farid Safarov.

GTSOU’s CEO also drew the attention of MEPs to the need to protect not only Ukrainian consumers but also European ones. After all, given the recent volume of transit through Ukraine (about 41-42 mcm/d with a contracted 109 mcm/d), Russia is trying to prevent filling underground gas storage facilities in Europe in preparation for the heating season.

“With one strong-willed decision, Europe can prevent a humanitarian catastrophe in Ukraine and the destruction of Ukraine’s gas transportation infrastructure while reducing russia’s dominant position in the EU gas market. If we all don’t want to depend on russian gas, we must make russia dependent on us”, said Sergiy Makogon.