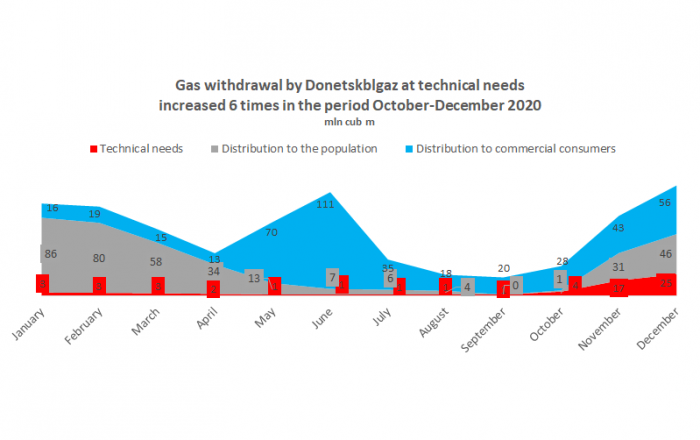 11 February 2021, Kyiv – Gas TSO of Ukraine has turned to law enforcement authorities with a request to conduct a legal assessment of Donetskoblgaz in relation to the company’s debts generated due to systematic unauthorized withdrawals of significant volumes of gas from the main gas pipeline system. Indeed, in 2020 Donetskoblgaz withdrew 81 million cubic meters of gas worth UAH 574 million for its production and technical needs, and so far has not paid 73% of the debt (or UAH 417 million). Donetskoblgaz is currently the largest debtor to GTSOU, and its non-payment amount is one-third of the total indebtedness of all oblgazes (regional gas companies).

GTSOU also draws the attention of law enforcement agencies to the abnormal dynamics of gas withdrawals conducted by Donetskoblgaz in November-December 2020. If in January-March 2020 the company withdrew 3.2 – 4.5 million cubic meters of gas, thereby accumulating UAH 65 million of accrued payables; consumed during the non-heating season  1.2 – 8.8 million cubic meters creating no new debts, then, once the heating season had commenced it rapidly started to increase the withdrawals. In November and December Donetskoblgaz withdrew 42.2 million cubic meters, and in January 2021, according to operational data, another 24.2 million cubic meters. Thus, the average monthly withdrawals in November-December increased by six times, as compared with the average for the year. At the same time, the company’s consumption losses for production and technological needs (PTN) reached 25% of the total gas transportation volume, while the average figure for other oblgazes is 4-5%. In other words, almost a quarter of the gas volume is actually being lost in the oblgaz grid on the its way to the consumers. Such a dynamics of the gas consumption for PTN does not have any reasonable explanation.

As a result, the company’s total debt increased by eight times amounting to UAH 417 mln over the last two months of 2020. Experts estimate that if the debt is not paid in January 2021, it will grow by about UAH 269 million. 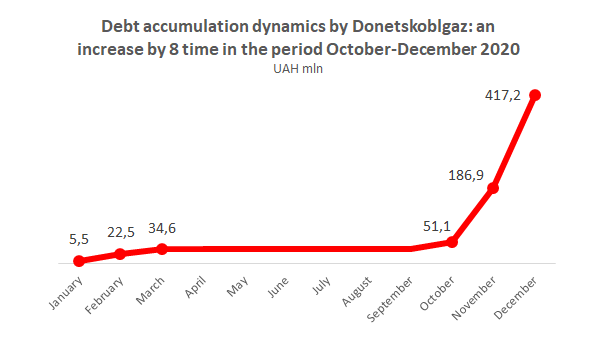 Therefore, GTSOU also appealed to the Regulator (NKREKP) with a request to check the company’s activity. According to the results of an unscheduled field inspection carried out by NKREKP, Donetskoblgaz was fined UAH 102000 on 10 February 2021 for breaching legal requirements and license conditions.

It should be noted that other aspects of Donetskoblgaz’s activities have already attracted the attention of law enforcement agencies. Indeed, at the beginning of February 2021, based on information from the Prosecutor General’s Office of Ukraine, a pre-trial investigation was completed in the criminal proceedings on suspicion of Donetskoblgaz officials of embezzling over UAH 500 million of the company’s funds. It was discovered that during 2017-2020, the financial director of Donetskoblgaz, in collusion with other individuals, systematically conducted unlawful transfer of funds from the company’s accounts to the bank accounts of legal entities. A pre-trial investigation is being conducted on similar fact in relation to the first deputy chair of the board of Donetskoblgaz. As part of this proceeding, the circumstances of the including the illegally transferred funds of Donetskoblgaz into the population’s tariffs for consumed natural gas are also being under investigation.

It cannot be ruled out that the dynamics of the increase of the gas withdrawal volumes for production and technological needs (PTN) and formation of imbalances within the GTS by Donetskoblgaz may also be related to these violations.

“The example of Donetskoblgaz is another indicator of the existence of a systematic problem of unauthorized withdrawals in the gas market. It could have been avoided if the issue of targeted use of funds by regional gas companies had been regulated at the legislative level by introducing accounts with a special status. This mechanism guarantees that a part of the tariff revenues of Gas DSOs will be used to cover debts owed to the state Gas TSO. As for inefficient management of oblgazes, NKREKP could adopt the practice used by financial institutions – the introduction of temporary administrations. In this case, the Regulator could introduce temporary administration in the oblgaz, which violates license conditions, in order to get the company out of the problem area. It is also necessary for Gas DSOs to have an open procurement policy. Doing so would clear up a lot of questions as to how effectively they spend the money collected from the population”, considers Sergiy Makogon, CEO of Gas Transmission System Operator of Ukraine.

The problem of non-payment for imbalances (the difference between the volumes of gas that entered the gas transportation system and the volumes that left the gas transportation system), generated due to the unauthorized gas withdrawal by Gas DSOs, has remained unresolved since 2015. It led to accumulation of bad debts to the previous operator of the GTS (JSC Ukrtransgaz) in the amount of more than UAH 44 billion for the period from 2015 to 2019. At present, there is a real threat to the financial stability of the new independent Gas TSO due to the problems of non-paid gas withdrawals by regional gas companies. Therefore, the company calls on all the branches of the government to consolidate efforts to resolve the given issue for ensuring reliable, accident-free and stable operation of the Ukrainian GTS. For its part, GTSOU is taking all legal measures to return the funds to the budget and to prevent unscrupulous contractors from causing economic damages to the state in the future.