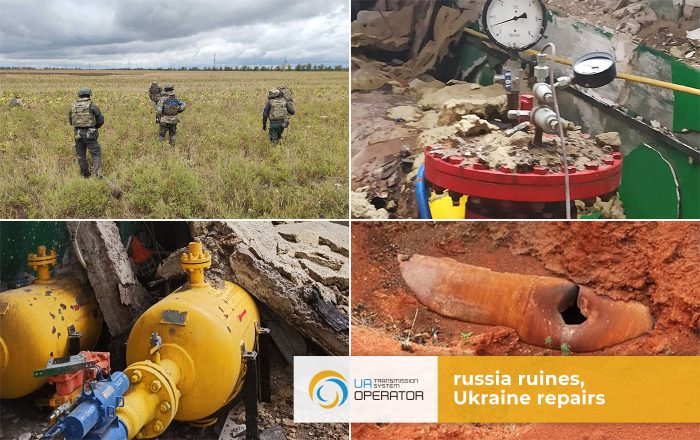 This year’s preparation for the fall and winter period is exceptional because the war adds complexity and special responsibility to each part of the GTS. Today, GTSOU’s priority is to restore the territories liberated by the Armed Forces of Ukraine, because it is there that gas and other energy sources provide normal conditions for people’s lives.

Due to the counterattack by the Ukrainian Armed Forces and the liberation of settlements in the Kharkiv and Donetsk regions, GTSOU specialists began active work to restore the damaged sections of the main gas pipelines, gas distribution stations, power supply, and other GTS facilities, access to which was previously unavailable due to occupation and hostilities. During the first weeks of September, the Company’s specialists carried out emergency recovery works on the main gas pipelines in the Kharkiv region. Specialists also inspected gas pipelines in Kharkiv, identified the actual places of prior damage, and began to restore them.

Unfortunately, since the beginning of hostilities, some facilities have suffered numerous damages and are subject to restoration not for the first time. However, taking into account the importance of natural gas transportation for the region’s needs, GTSOU employees persevere in carrying out repair work.

During the same week, specialists from the Kramatorsk MPLPD examined the main gas pipeline, which had numerous damages to linear parts and shutoff valves and for a long time had been in the area, which could not be reached.

Currently, the employees of GTSOU face significant complications due to working in territories with a high mining density. All restoration works are carried out in close contact with the regional administrations, with the organization of support from the Armed Forces and State Emergency Services, and conducting pre-clearance. However, at the moment, due to the duration of security measures, there is still no access to some facilities of the main gas pipelines, which need to be repaired.

“Today, the key task for the Company is to resume gas transportation in the liberated territories. We do everything to start the work on the facilities, damaged by the occupants, as quickly as possible. While repairmen are working 24/7, we are recruiting additional teams from other regions of the country. The key constraint at the moment is the need to demine the territories before carrying out the work. That is why we closely cooperate with the Armed Forces, the State Emergency Service, and local civil-military administrations. There is a lot of work, but we are doing our best to do it as soon as possible,” commented Sergiy Makogon, CEO of GTSOU.

Apart from restoring damaged facilities in the liberated territories, GTSOU specialists perform scheduled works and prepare infrastructure for the heating season throughout Ukraine.

Thus, from May to August this year, with the start of preparation for the heating season, our MPLPDs:

In this extremely difficult time, GTSOU is doing its utmost to ensure stable transportation of gas to the residents of Ukraine and remains a reliable partner for Europe.