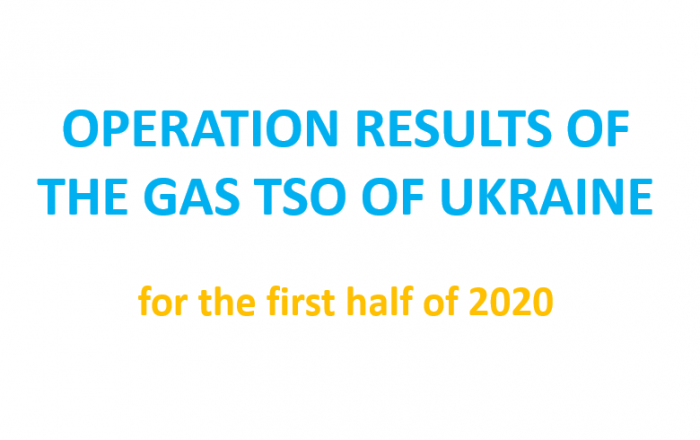 LLC “GTS Operator of Ukraine” informs about the results of its operation activities for the first half of the year as an independent company and a separate Gas TSO starting from January 1, 2020.

July 24, 2020, Kyiv – In the first half of 2020, Gas TSO of Ukraine fully implemented all daily nominations for transit / import and ensured uninterruptable gas transmission to European and Ukrainian consumers. According to the results of 6 months, the company has become one of the largest taxpayers in Ukraine.

The Gas TSO systematically works on the liberalization of the Ukrainian gas market and its integration into the European one, as well as on the introduction of new services and opportunities for its participants. In particular, in the first half of 2020 the possibility of virtual reverse (backhaul) on Polish, Slovak and Hungarian routes was launched for the first time. The single virtual interconnection points with Poland and Hungary were created for the convenience of traders and a transparent mechanism for capacity allocation for 2021 using auctions on certified platforms was implemented. The demand for the new shorthaul service grows every month, increasing the volume of gas injections into Ukrainian underground storage facilities has reached record levels. Gas TSO of Ukraine also applied a new progressive approach to gas procurement and obtained an optimal market price that correlates with quotations on European gas hubs.

“The new independent Gas TSO succeds. We ensure uninterrupted gas supply to Ukrainian consumers and fully transit gas to the EU and Moldova. We have a highly qualified team of 11-thousand employees, which guarantees the safe operation of the GTS with its daily continuous work. The Gas TSO becomes a powerful state-owned company that effectively uses the Ukrainian state-owned GTS and pays significant funds to the state in the form of taxes and to the shareholder in the form of dividends. According to the results of the work for the first half of this year, UAH 6.5 billion of taxes will be paid. We confidently look to the future and are ready for new challenges,” – Sergiy Makogon, General Director of GTSOU, commented the results of first half of the year during the online discussion.

PJSC Gazprom has been fully paying for the entire volume of booked capacities, out of which only 77% were used in the first half of the year (more).

For the first time in the history of the Ukrainian GTS, gas transit is available not only for Gazprom, but also for other international companies – between EU countries through Ukraine. In the first half of 2020, test transit operations were carried out on the routes Slovakia-Hungary, Slovakia-Poland and Hungary-Slovakia, as well as from the “customs warehouse” to Slovakia, Poland and Hungary.

During this period, the share of imports in the shorthaul mode amounted to 26% of the total volume of imported gas to Ukraine.

UGS. In January-June 2020, 6.0 billion cubic meters of gas were transported to the UGS Operator for injection into underground gas storage facilities, which is 22% more than last year and is an absolute record for this period.

Gas production. The inflow of natural gas into the GTS from gas production enterprises of Ukraine amounted to 9.8 billion cubic meters, which is 7% less than the same period last year.

Consumption. Since the beginning of the year, 15.4 billion cubic meters of gas have been transported to Ukrainian consumers of all categories, which is 5% more than in 2019. Due to significant reduction of transit, the total use of fuel gas for production and technological expenses (PTE) decreased by 53% to 0.9 billion cubic meters.

LLC “GTS Operator of Ukraine” receives regulatory revenue exclusively by fixed tariffs for its services, the rates of which is set by the National Energy and Utilities Regulatory Commission of Ukraine (NKREKP). The company’s expenses are clearly defined by the financial plan for 2020, which was approved by the Supervisory Board of the shareholder (JSC “Mahistralni Gazoprovody Ukrainy”) at the beginning of the year.

According to the operational information of the Finance Department, within the first 6 months Gas TSO of Ukraine received UAH 29.4 billion of revenue, of which 73% – for the providing of gas transit services from Russia to the EU and Moldova, and the other 27% – for transportation within Ukraine, daily balancing services and so on. The total amount of expenses for this period amounted to UAH 10.1 billion. It should be noted, that more than half of the expenses were used to purchase natural gas for production needs and balancing services. The rest is for technical service and current repairs of GTS facilities, fuels lubricants and reagents, taxes and other production outlay.

In January-June 2020, LLC Gas TSO of Ukraine has already paid to the budgets of all levels the total amount of UAH 5 billion 151 million of taxes and fees. Including UAH 1.4 billion of income tax for the 2nd quarter of 2020, which will be paid in August, the tax payment of GTSOU for the reporting period of the first-half of the year will amount to UAH 6 billion 551 million.

It is expected that by the end of this year GTSOU will pay about 12-14 billion UAH to the state and local budgets, and thus will be among the ten largest taxpayers in Ukraine.

Due to purchases via Prozorro in the first half of 2020, GTSOU managed to achieve savings of UAH 3.8 billion.

During the period of January-June 2020, the Gas TSO of Ukraine conducted 655 tenders with a total expected value of UAH 27.4 billion (excluding VAT). Of which 60%, or 391 auctions, have already signed contracts.

The largest categories among the announced procurements in the first-half of the year were: 1) natural gas; 2) electricity; 3) repairs and maintenance of gas pumping units; 4) repair of trunk gas pipelines; 5) modernization of compressor stations; 6) reconstruction of trunk gas pipelines. It should be noted, that the auctions with the highest expected value – natural gas and electricity – were highly competitive. About 4-7 companies took part in it, which allowed to get the optimal market price.

Natural gas purchases accounted to 53% of all GTSOU expenses in the first-half of 2020. A total of 35 procedures were done with a total expected value of UAH 18.4 billion. Due to high competition at the auction – about 4-7 participants – the company has reached 19% savings. As a result, the contracts for this category were concluded for UAH 15.0 billion.

According to the results of January-June, the total debt to the Gas TSO of Ukraine for negative imbalances is UAH 1,031 billion . As of today, 99% or UAH 1,028 billion of debts are formed by 33 DSOs (distribution system operators), and the other 4 customers of gas transportation services formed only UAH 2.6 million.

The Gas TSO fully fulfills its obligations to market participants and paid them 100% (UAH 2.5 billion) on time for positive imbalances for the period January-June 2020. While the level of payment of DSOs to GTSOU for negative imbalances is only 14%.

According to the Gas TSO, if the problem of non-payment by DSOs for the used gas will not be promptly resolved, by the end of the year the amount of doubtful debts may increase to UAH 5 billion. It means that the dividends of GTSOU, which is planned to be paid to the shareholder, the final beneficiary of which are the people of Ukraine, will be reduced by this amount.

One of the key strategic initiatives of GTSOU is to reduce the negative impact on the environment. The company has approved the Environmental Policy and Energy Policy, which provide for mandatory environmental impact assessment during the realization of all projects of reconstruction and building of compressor stations.

Following the results of the first half of the year, GTSOU significantly reduced emissions of pollutants, including due to a significant reduction in transit volumes: CO2 by 62%, methane – by 22%, nitrogen compounds – by 56%, water using – by 28%.

The company has also carried out more than a thousand environmental measures – environmental and technical inspections of gas pumping units, laboratory quality control of surface wastewater, the organization of a system of separate collection and delivery of secondary raw materials.

In order to reduce natural gas emissions, GTSOU uses new technologies to identify and eliminate the sources of gas emissions (mobile laboratories) and considers the possibility of moving to the transportation of renewable gases (hydrogen and synthetic methane) in the future.

Despite the successful results for the first six months, the Gas TSO of Ukraine is still facing the unresolved challenges and problems that will directly affect the viability and fate of both – the company and the GTS of Ukraine.

Among it are the historical problem of imbalances (DSOs owed UAH 1.0 billion in six months) and the risk of completing bypass pipelines – “North Stream – 2” and the continuation of “Turkish Stream” to Hungary via Bulgaria and Serbia. In addition, it is the risk of unbundling incompleteness and loss of European certification for the Gas TSO, which may provoke the cancellation of a transit contract which is beneficial to Ukraine. In addition, we are actively preparing for the opening of the gas market for the people and the abolishment of public special obligations (PSO).

For the second-half of the year, the priority tasks to be solved with the neighboring Gas TSOs are to switchover to a single virtual interconnection point on the Slovak-Ukrainian border, to establish a transparent procedure for gas transportation through Moldova, which will allow full use of the Trans-Balkan gas pipeline in both directions. Also it is extending the interconnection agreement to all connection points with Romania, which will open access to the Romanian market.

“The Ukrainian GTS does not exist in itself. It is a full-fledged part of the European gas transmission network. And we are very dependent on how many bypasses will be built around us. Therefore, we are also purposefully working on Nord Stream – 2 and Turkish Stream projects, which, despite their different capacities, are equally threatening for Ukraine, its economic interests and national security,” – Olga Bielkova, Director on Government and International Affairs of OGTSU, said.